Though I’ve been thinking of writing a blog post for long – but couldn’t actually get a concrete topic to write on – or maybe it was the occasion which wasn’t setting in to write something..

That said, having watched today’s episode of KBC – of the 5 crore winner Sushil Kumar (though the following episode is still pending – to see him actually win) – was quite thought provoking – and so something I thought of penning down – here better.

I’ve always admired Mr. Amitabh Bachchan for his charisma, his energy, and his humbleness. He’s been a person who’s always been an inspiration, for amazingly he holds this unending source of energy that he fits in so many things – with so much grace and so effortlessly ! He’s awake early morning, has a morning routine of exercising and stuff (something I’m yet to create for myself ;P ), then on the sets for many hours of the day – working tirelessly ! That could well be considered A routine – but now include to it : Twitter after the whole work day, then a blog entry almost everyday without fail ! (I would myself be shameful on that front – seeing my blog of 2 months – which I started quite out of fun to write in something of and on – having only 2 posts till now ! :/ ) Now this sure is quite an energy – because adding to the writing it’s also going through the responses on previous posts and answering back on quite a many comments.. And he goes through all the comments I know – because I’d once been thanked too – in a line it might be – for a comment I made on his blog (out of concern though that was).. That IS some energy – and at this age – WHOA !

But this is something you might have seen and read about quite a many times – for he is an inspiration for many – and many would be looking up to him each day – which is so evident by the response he gets everywhere – and especially so on the sets of KBC ! It’s amazing how some listeners and contestants go crazy just hearing his voice ! I remember seeing an episode – a TCS employee – the moment he heard him (phone a friend it was) he was so elated he even said it doesn’t matter if he gave the wrong answer – as talking to him was more of a great thing for him ! ;P

That said, I believe he too is quite lucky to have the privilege of meeting so many people – of such unique personalities everyday ! Each one teaches something or the other. While some teach how people find ways to be happy even with small pleasures of life – living life to the fullest despite  of the various misfortunes in their lives – while some teach how foolish or idiotic AND irritating people can be ! And hat’s off to Mr. Bachchan’s patience that he is even able to tolerate such people ! :/

The show’s theme is quite apt – and really great that it inspires each person to think big and not give up on the dreams that they dream of. Today’s contestant (which we all know goes on to win 5 crores) was another one of such kind. He always dreamt of coming to KBC – has been without fail watching the show for the past 11 years and always had great plans for his life inspite of earning a meagre salary of 6000 rupees. His charisma, the want to do something big, the eagerness to help the underprivileged despite of the fact that he himself has a long way to go to financially gain stability – is all that hugely inspires ! 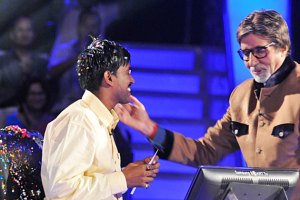 And as it has been – observing people that I learn – it’s great how people teach you so many things..

This man – not much to his credit before the KBC win – has so much of zeal to do things – to teach kids, help them be great – to study more and more, to read more and to do things for his family – all this seems just so humble – and so fitting a contestant to win this dear amount ! :)

So lesson of the day surely is, as my current read always keeps on telling (The Magic of Thinking Big, Dr. Schwartz), let not the happenings of the day let you down, and let not what people hold good set your standards – you have your own role to play in this world and your own standards to form – you set your barriers and your limits – so always try to set them high – and then exceed them – that is life’s main purpose my dear – and the essence of success..